HomeBlogRepost: 4 Ways to Lower the Cost of College

Repost: 4 Ways to Lower the Cost of College

I saw this article about tuition savings on Fidelity and thought I would share it.

Families are becoming more frugal with tuition bills why not find out more. Here are four ways you can too.
Americans have become so accustomed to discounts on everything from cans of soda to new cars that savvy parents like Michael Reinemer are even getting a break on college tuition.

Reinemer, a communications consultant in Annandale, Va., estimates he shaved 15% to 20% off the full price of attendance at four-year colleges for each of his three children.

Reinemer and his family used different strategies that helped two of them graduate debt-free from public colleges in Virginia while the third graduated with college loans — but an amount that’s manageable.

“We decided we would have to do everything we could to make it more manageable; it would be an all-hands-on-deck situation,” says Reinemer.

“The recession has taught families a lesson about paying for college and they are looking increasingly at grants and scholarships.”  NIKKI LAVOIE, SALLIE MAE

The Reinemers’ cost-saving experience is becoming more common, according to “How America Pays for College 2013,” a survey released in July by student loan provider Sallie Mae.

The main steps to saving? Eliminating colleges that are too expensive, living at home and graduating in less than four years.

Families can use other strategies to limit spending and minimize borrowing — if they plan ahead. The planning can be worth it. Last year’s seniors graduated with $26,600 in student loan debt, on average, according to the Institute for College Access and Success. For some graduates, college debts are much higher.

1. Test drive the calculators
Don’t repeat the mistake of 40% of Sallie Mae survey respondents who ruled out schools due to a high sticker price before they even tried simple tools to research financial aid.

Instead, take advantage of the “net price calculators” that every four-year college must offer now. They provide a more accurate snapshot of the true out-of-pocket costs after scholarships and grants.

Most of the calculators, which became mandatory in 2011, ask for basic financial data and can be completed in about 15 minutes. As the chart below illustrates, differences between published costs and net costs can be substantial.

“Knowing [about financial aid] in advance really helps,” says Patricia Briggs, associate director of financial aid at Dartmouth College, which offers an extra calculator for families with income of $200,000 or more. Higher-income families are “starting to realize that there is aid available to them,” she says.

Myra Smith, executive director of financial aid services for the College Board, which administers SAT and Advanced Placement tests, recommends test-driving net price calculators as early as eighth grade to narrow the list of your child’s prospective schools to fit the family budget.

The exercise can also help motivate students to work harder for scholarships or other forms or aid.

2. Take advantage of 529 plans
529 savings plans are a powerful yet under-used resource for building a college nest egg. The primary advantages of 529s are tax-free growth of contributions and tax-free withdrawals for qualified college expenses.

Opening an account for a student early on can lead to meaningful growth advantages over time. The state-sponsored accounts, which invest in stock and bond mutual funds, also often feature state tax deductions for contributions depending on the individual plan. While 529 adoption is on the rise, according to data from the “College Savings Indicator” study released by Fidelity Investments in August, misconceptions about the accounts have limited more widespread use.

Half of parents surveyed by Fidelity worried that college savings accounts like 529s would affect their financial aid eligibility, for example. But as parental assets, 529 balances count for less than 6% of a family’s expected college contribution.

“Saving is a good thing and it’s never too late to start,” says Keith Bernhardt, vice president of college planning at Fidelity. “529s provide more options for a child in college, and help reduce the need to take out loans.”

Opening a 529 account is a powerful way to jumpstart a college savings plan.

The Fidelity survey found that 88% of 529 accountholders have a plan in place to meet college savings goals. More parents seem to be getting the message as 529 usage is at its highest level ever by accounts and total assets, according to the College Savings Plan Network.

Grants and scholarships — free money that students don’t have to pay back — covered the largest portion of college costs (30%) this past school year, according to Sallie Mae, up from 25% in 2009. Meanwhile, the average financial aid award grew to $6,355 per family from $4,859.

“The recession has taught families a lesson about paying for college and they are looking increasingly at grants and scholarships,” says Sallie Mae’s Nikki Lavoie. 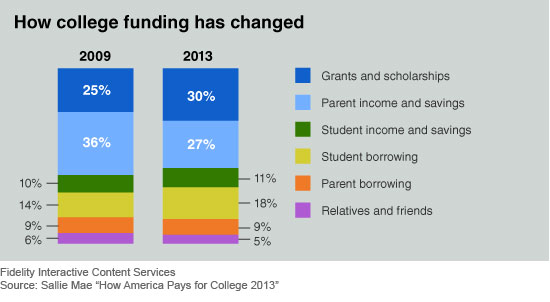 Students can earn both merit and need-based financial aid.  Need-based aid is awarded directly by colleges based on a family’s financial situation and requires completion of the Free Application for Federal Student Aid (FAFSA).

After moving away from need-based aid in the decade leading up to the Great Recession, more schools are stepping up their commitment. At the more selective private colleges (those accepting less than 45% of applicants) need-based aid consistently accounts for more than 85% of total grants awarded, according to the College Board.

Stellar grades and standardized test scores are prerequisites for most academic awards but scholarships that recognize a particular interest, affiliation or geographic location are within reach of persistent students willing to cast a wide net. Websites recommended for scholarship searches include Fastweb, CollegeAnswer and Scholarships.com, which match grants to student profiles.

Having her tuition paid for inspired Wolfinbarger to beat the bushes for additional grants that covered her remaining college expenses. That experience led her to develop an action plan for students to find and win scholarships. The plan centers on:

4. Let students chip in
Students are shouldering more and more of the cost of college.  In fact, 51% contributed to college expenses through current income, savings or work-study in 2013, the highest level in the six-year history of the Sallie Mae survey. Meanwhile, 54% of parents polled by Fidelity will ask their children to work part-time during school to help cover expenses.

Grigory Lukin, author of “Go to College Without Going Broke,” recommends on-campus jobs such as residential advisers, or RAs, who get free room and board for helping to oversee student dorms.

Teaching assistants and tutors can also earn attractive wages for their academic achievements. Other students have earned significant income through co-op programs that mix full-time off-campus employment with classroom study.

Student employment is important to colleges as well. Most schools break their expected family contribution into parent and student components. Dartmouth and other Ivy League schools expect all students to contribute at least a minimum amount to college bills.

While student income is counted at a higher percentage than parental income in financial aid calculations, every dollar earned is one less dollar they will need to take out in loans.

“Working definitely helped,” says Reinemer, whose son paid his way through two years of community college with a construction job. “The income is significant, especially for textbooks and miscellaneous expenses.”

Whether they are trimming smaller expenses or taking advantage of larger pools of financial aid or college savings accounts, families can earn an “A” in College Cost Discounts 101 through smart planning, persistence and hard work.

Mark McLaughlin is a freelance contributor for Fidelity Interactive Content Services, a provider of objective investing content on Fidelity.com.